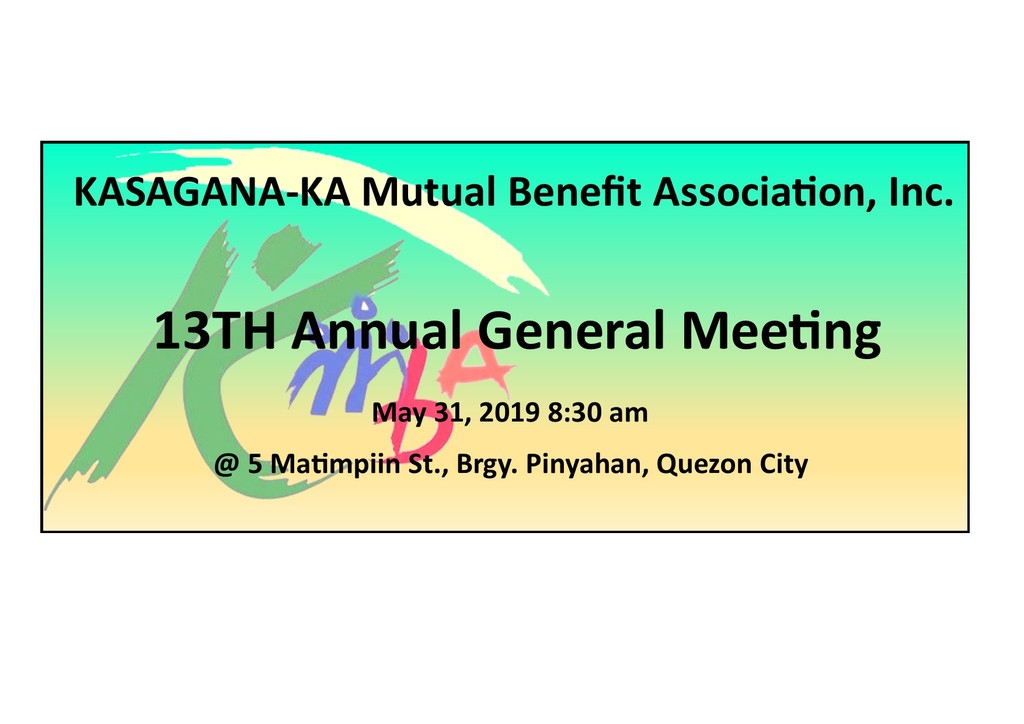 Please be informed that our 13th KMBA ANNUAL GENERAL MEETING is scheduled on MAY 31, 2019, Friday, at the KMBA Building located at 5 Matimpiin St., Barangay Pinyahan, Quezon City to consider and approve the matters set forth in the following agenda:

The Board secretary will make a roll call and determine quorum. At least two-thirds of the regular membership constitutes a quorum.

The members may comment and/or approve the agenda as proposed.

A report of unfinished business/es, directives and updates on these matters

Ms. Isabel M. Iliw-Iliw, the incumbent President will deliver her report to the Association, which needs acceptance by the general membership.

Ms. Marissa A. Loyola, the incumbent Treasurer will provide a summary report of the key financial statement’s figures as of December 31, 2018 as reported by BDO Roxas Cruz Tagle and Co. (formerly Alba Romeo and Co., CPA’s) external auditor, reviewed and accepted by the Board of Trustees through the General Manager, Silvida Reyes-Antiquera.  This needs acceptance by the general membership.

VIII.       Approval and ratification of the Board and Management Actions

A list of major policies and activities acted upon by the Board of trustees and management in year 2018, significantly forming part of the President’s report that needs approval from the general membership.

IX.          Confirmation of the elected representative from the Kasagana-ka Employee-Employer Provident Fund (KEEPF) as a new member of the board of trustees.

X.           Appointment of an External Auditor and compiler for 2019 Financial Statement

a.    Election guidelines and voting system

A presentation of the election guidelines as provided under the by-laws in the election of trustees, officers, independent trustees and terms of office.

b.    Election of Board of Trustees

The members of the Board of Trustees will cast their votes on the day of the Annual General Meeting.  Canvassing of votes will follow shortly after all the board members cast their votes. Winning candidates will be announced.

The newly elected Board of Trustees will take an oath of office before assuming leadership starting on June 1, 2019.