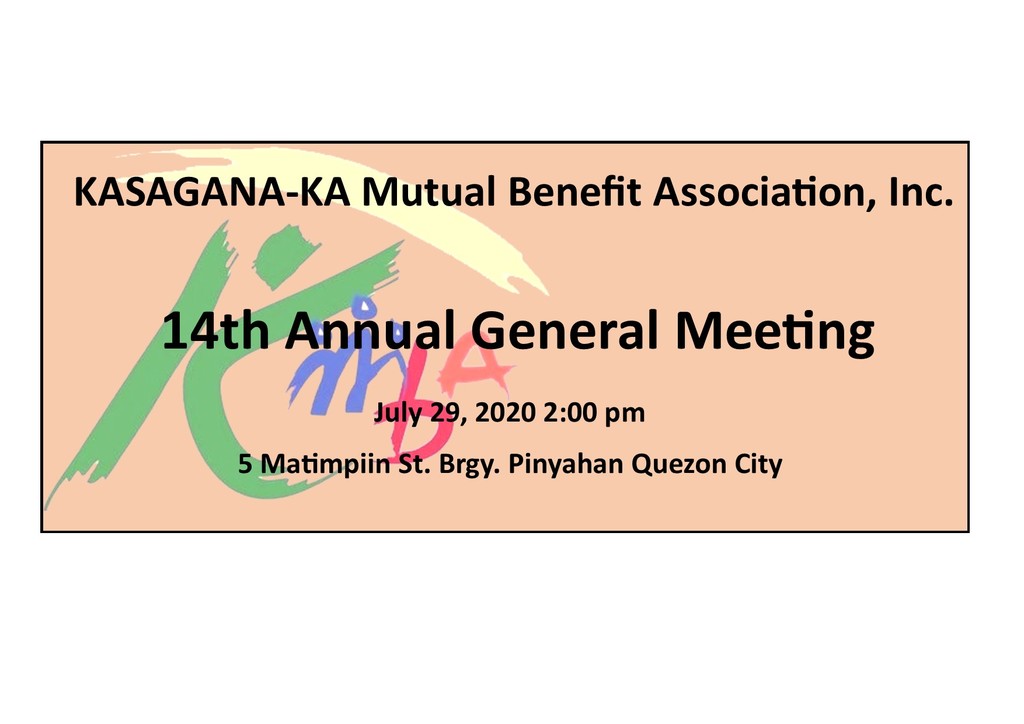 In view of the current COVID-19 pandemic and the declaration of an extended General Community Quarantine in Metro Manila and nearby provinces that restricts the  movement of people and prohibits mass gatherings, KMBA has moved the conduct of its 14th Annual General Meeting originally scheduled on May 31, 2020 to JULY 29, 2020 from 2:00-5:00 in the afternoon through videoconferencing, to consider and approve the matters set forth in the following agenda:

The presiding officer shall instruct the Board Secretary to make a roll call.  Following the guidelines set by SEC on the conduct of remote communication, each official representative/delegate shall state the following: a) Full name and position; b) Location; c) Confirmation that she/he can hear and/or see the other participants; d) Confirmation that she/he received the Notice of the Meeting including the agenda and materials; and e) Specify the device being used (ie., smartphone, tablet, laptop, desktop, etc.).  Thereafter, the Board Secretary shall confirm and note the participants and certify the existence of quorum. Two-thirds of the general membership constitutes a quorum.

IV.    Review and approval of the proposed agenda

The members comment and/or approve the agenda as proposed.

A report of unfinished business/es, directives and updates on these matters from the previous minutes of the meeting.

VII.  Presentation of the President’s Report

Mrs. Enriqueta Navarro, the incumbent KMBA President will deliver her 2019 report to the Association, which needs acceptance by the general membership.

The management will share details of key activities based on the target and achievements for 2019 and plans and budget for 2020, for the members’ acceptance and approval.

Mrs. Ma. Lilibeth Molina, the incumbent Treasurer may request the external auditor, BDO Roxas Cruz Tagle and Co. (formerly Alba Romeo and Co., CPA’s) to provide a summary report of the key financial statement’s figures as of December 31, 2019 which was reviewed and accepted by the Board of Trustees through the General Manager, Silvida Reyes-Antiquera.  This needs acceptance by the general membership.

The respective Committee Chairpersons will render their report of accomplishments for the year 2019.

X.    Matters for approval and ratification

a.   Approval and Ratification of the Board and Management Actions

A list of major policies and activities acted upon by the Board of trustees and management in the year 2019, significantly forming part of the President’s report that needs approval from the general membership.

b.   Proposed amendments in the Articles of Incorporation

Proposed changes in the constitutive documents of KMBA as approved by the Board will be presented for the approval of the general membership.

c.   Appointment of an External Auditor for the 2020 Financial Statement

The Board has initiated a selection process for the external auditor based on the current policies and has provided its recommendation to retain the services of BDO Roxas Cruz Tagle and Co. (formerly Alba Romeo and Co., CPA’s) for the 2020 Financial Statement. The appointment of the external auditor needs confirmation from the general membership.

d.   Confirmation on the appointment of an Independent Board member

e.   Confirmation of the duly elected representative from the Kasagana-ka Employee-Employer Provident Fund (KEEPF) as a member of the board of trustees.

Mr. Kanneth Morota, President of the KEEPF is recommended by the Board of Trustees as a new member of the KMBA Board of Trustees for a period of 3 years from July 2020-May 2023. This needs acceptance from the general membership.

XI.   Election of New members of the Board of Trustees

There will be no election of the 6-member representatives since the term of the previously elected board members will be served until 2021 and 2022.

As a policy, KMBA does not distribute dividends to members, however, under the amended insurance code Section 408, paragraph 3, Policy on dividends, KMBA may be allowed to use part of the free and unassigned surplus to provide benefits to members as a form of dividend.

The newly elected/confirmed Board of Trustee/s will take an oath of office before assuming leadership starting on July 30, 2020.

Final turn-over of the KMBA Members’ Center to the Association. This needs acceptance from the general membership.